This is a brief introduction to the use of Launchpad for bug tracking. It examines the unique features of the Launchpad bug tracker, which may not be familiar to folks who have extensive experience with other bug trackers like Bugzilla.

Very often, projects themselves have very good bug trackers, and good communities all of whom know the internal policies and practices of the project (and of course all of whom already have the relevant accounts in the bug tracker) to be able to collaborate with one another. But as soon as an issue affects outsiders - people from other communities - there are barriers to their ability to collaborate with one another. If I find a bug in X.org, for example, I need to go and get an account on the X.org bug tracker to be able to report it. That represents a disincentive to my participation, and many bugs go unreported as a result.

More importantly, there are often different and distinct communities that work on the same codebases. Consider the Apache web server - there is an "upstream" community that works on it, and of course there are also many distro-specific teams that patch Apache. Launchpad is designed to make it easy for those disparate groups to collaborate.

An example will help to make this clear.

An email interface to the Launchpad bug tracker lets you stay productive, working through email, reviewing bug comments, updating bug statuses and adding attachments to bugs. You can even report bugs directly using the email interface.

Almost any operation - from marking a bug closed, to passing a bug "upstream", to changing any tag or description or attribute of the bug, can be done through the email interface. This makes developers extremely productive, especially when combined with distributed revision control which lets developers work entirely offline while still maintaining version control integrity.

See UsingMaloneEmail for details of how you can use email to triage and manage bugs. 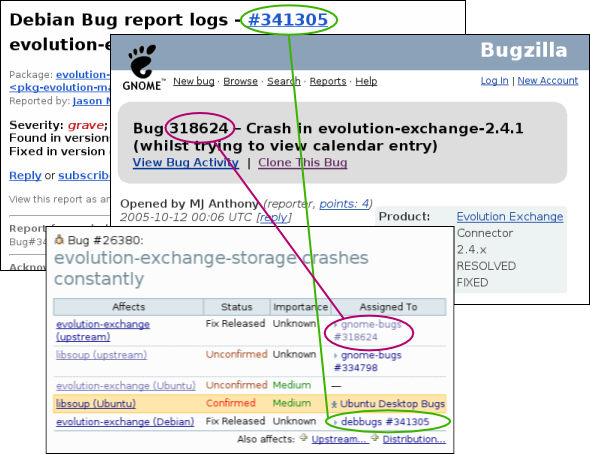 Many projects have their own Bugzilla, or use SourceForge for bug tracking. These projects can still get some of the collaborative benefits of Launchpad's cross-project bug tracking, because of a feature known as "bug watches". Essentially, it is possible to tell Launchpad that a particular bug is also being tracked in, say, a particular bug number of a Bugzilla instance. Launchpad can then monitor that Bugzilla report, and provide notifications to the people subscribed to the Launchpad bug when something changes in the remote bug tracker.

So, for example, if you have a bug in Python being tracked in Launchpad, and someone realises that the same bug has been reported in the Red Hat Bugzilla, it is trivial to create a bug watch linking the Launchpad bug report to the Red Hat Bugzilla report. If Red Hat marks the bug fixed, then the Python community that is tracking this bug in Launchpad will immediately receive an email notification of the change, and it will be reflected on the Launchpad bug page too. That means that a member of upstream immediately knows who to talk to at Red Hat about bring the fix into the mainline.

These bug watches are integrated into Launchpad's usual mechanism for tracking a single bug in multiple places. You can link a bug's status to a watch, in effect saying that "this bugzilla report documents the state of the bug for this product in Launchpad". So you can integrate the work of other projects that are using totally separate infrastructure. Of course, there is some loss of information, so projects that need to collaborate closely are still better off both using Launchpad, but if you need to collaborate with another project that has their own infrastructure then Launchpad can still make that as easy as posible.

Launchpad makes it easy to identify bugs that are security-related, and deal with them appropriately. It also lets you mark bugs as private, and ensure that only trusted people can see the bug details.

You can visit your project's Sharing page to share all "Private Security" information with team you trust to work with security bugs and branches. The members of the teams can choose to subscribe to bug email and add a filter to get just "Private Security".

The collaborative nature of Launchpad is very useful for dealing with security bugs, because such issues often impact on multiple projects. For example, if a security issue arises in a commonly-used shared library, such as zlib, Launchpad allows one to create tasks for the bug on each of the projects that are affected, and privately to have a conversation with all of them, keeping track of their individual progress in addressing the issue before a public announcement is made.

CVEs are a standard registry of security vulnerabilities, so they can be tracked across multiple operating systems.

Launchpad can be told which CVE reports apply for a particular issue, and can then help you keep track of which CVE issues are addressed or not yet addressed for your project. The CVE tracking and reporting features of Launchpad are simple, but nonetheless useful if security reporting and audit are important to you.

Launchpad bug tracking is also integrated with other parts of Launchpad. For example, Launchpad includes a system for planning features and charting the course of development. Sometimes, users will report "wishlist" bugs related to features that are planned - and Launchpad makes it easy to link those bugs to the relevant feature requests. This makes it easy for people working on the feature to keep track of relevant bug reports, and of course lets the people who reported those bugs keep track of changes to the specification of the feature.

Launchpad has quite a sophisticated team management system. This lets you create arbitrary teams of people (and even teams of teams, for finely structured management of diverse but related groups). You can treat a team just like a person - which means you can assign bugs to teams, or have a team be the "bug supervisor" for your project.

This turns out to be a very neat way to handle bugs. We have seen how projects tend to form appropriate teams very quickly, and use the "teams of teams" approach to aggregate them and to delegate team management to the leaders of subteams. Typically, QA folks assign a new bug to a relevant team, and someone on the team then claims the bug for themselves. In this way people aren't arbitrarily made the assignee for bugs they did not select themselves, but there is still a general sense of the "group that is likely to want to fix this".

Some features of the Launchpad bug tracker are not yet complete, but should be in place by the end of the year. I will discuss three of them in particular. The list of planned features itself can be found here:

Launchpad can be used to keep track of development being done by your community on multiple independent branches. This is because Launchpad has a branch management subsystem designed to work with Bazaar, a fast, distributed revision control system written in Python.

It is not necessary for your project "trunk" to use Bazaar in order to reap these benefits. The main project can continue to use Subversion or CVS, and Launchpad can publish a Bazaar version of that branch which your community can use to branch off while they do their own personal development. If they register their branches with Launchpad, and in doing so note that they are working on a particular bug in that branch, then Launchpad will notify the other subscribers to the bug that the branch exists and is being worked on. This allows people who have an interest in the bug either to pitch in and collaborate on the bug fix directly, or simply to know that they can find a fix by merging from the relevant branch.

We expect this feature to be complete by the end of November 2006.

Launchpad understands that projects want to keep track both of "mainline" development, and of specific releases. It allows you to manage your bugs with that in mind.

Launchpad has a general mechanism to describe the overall structure of the project:

Sometimes, a series represents "trunk" development, and sometimes it represents a "stable release series". So I would also expect to find a series for "Python trunk". The product can be told which series represents the current "mainline" or "trunk". In many cases there is an explicit branch which represents trunk all the time, but some products tend to "leap from series to series" rather than having a trunk from which they branch. For example, the old Linux kernel used to have "odd numbered branches" which were "trunk" when they were the focus of development, with "even numbered branches" representing stable release series.

In general, all bugs are filed against the product and you can consider those to represent "mainline". That's like saying "this is a bug in Python, please fix it someday". But just as you can record that a bug needs to be fixed in different places (upstream, and in downstreams that depend on the same code, and in distributions which package the code) and keep track of each of those "bugs" individually, you can also make a note that a particular bug needs to be fixed in a particular series.

This is like saying "yes, this bug in Python needs to be fixed in this specific release series". We call this "targeting a bug to a series" and it can be used either for release management of the next stable release, or to manage the decisions with regard to the backporting of fixes to previous stable releases.

Now, imagine that it turns out that the bug is quite a significant security issue. The team might think that the fix needs to be backported to a previous release, so they could propose that it also be fixed in the 1.0 and 1.1 series, which are still considered stable. In a very large project, you could have different people responsible for maintaining stable releases, so they would see that the bug had been proposed for backporting and might choose either to accept or decline it. If they accept it, then the bug will show up on the listing of open issues on 1.1 and 1.0.

We expect Launchpad's release management bug features to be complete by the end of October 2006.

The bug tracker is a primary focus area for us w.r.t. the XML-RPC interfaces. We expect the first version of these to be available before October 2006 and the API to mature over the course of the next year. We will also publish client libraries for Python applications that wrap the XML-RPC interface in a good Pythonic API.

The existing XML-RPC interface we have is documented at MaloneXMLRPC; check it out for details.